Apollo 1 was the first crewed mission of the Apollo program.

Originally labelled AS-204, the mission was planned to launch on February 21, 1967, with a low Earth orbital test of the Apollo command and service module. This did not happen, because on January 27, tragedy struck. During a launch rehearsal test at Cape Kennedy Air Force Station Launch Complex 34, a fire in the cabin killed all three members of the crew: Command Pilot Gus Grissom, Senior Pilot Ed White, and Pilot Roger B. Chaffee.

As a result of the fire, crewed Apollo flights were suspended for 20 months to address safety issues. The first successful crewed Apollo mission, Apollo 7, took place in October 1968. The crew was Apollo 1´s backup crew. 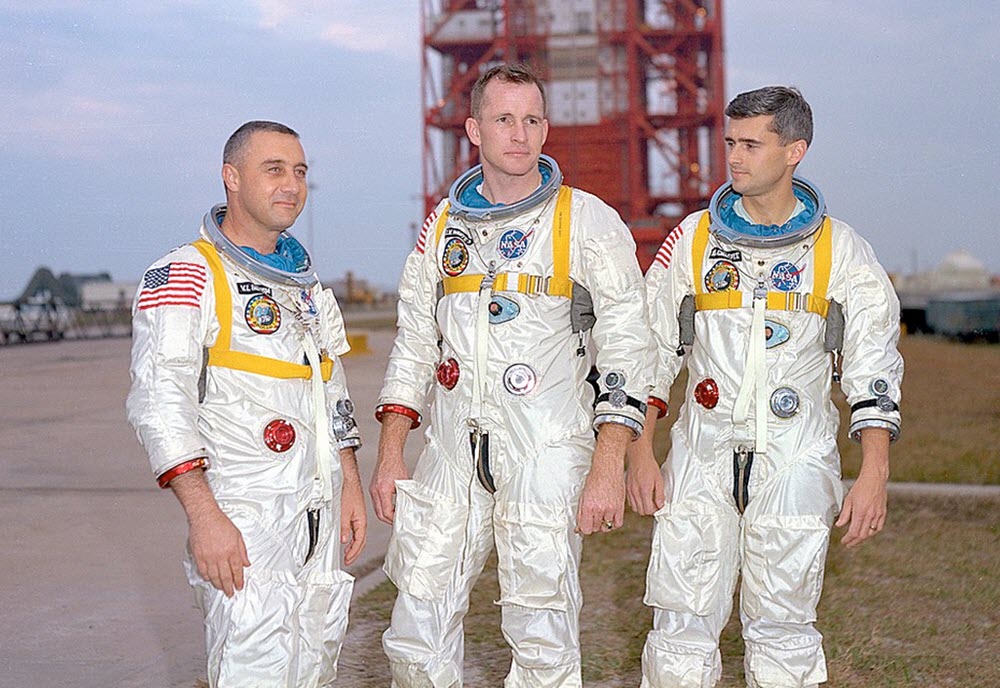 A serious lack of risk awareness and emergency prepardness at NASA was unveiled when the deadly 1967 fire was investigated.

NASA assembled an Accident Review Board to investigate the disaster, and both chambers of the U.S. Congress conducted their own committee inquiries to oversee NASA´s own investigation.

Roger Chaffee was a U.S. Naval officer, aviator and aeuronautical engineer. During his time with the Heavy Photographic Squadron 62, he earned the Air Medal for taking crucial photos of Cuba during the Cuban Missile Crisis.

Alongside twelve other pilots, Chaffee was selected by NASA to be an austronaut in the NASA Astronaut Group 3 in 1963. He served as capsule communicator for the Gemini 3 and Gemini 4 missions, and recieved his first spaceflight assignment in 1966 as the third-ranking pilot on Apollo 1.

Gus Grissom was a mechanical engineer and pilot in the U.S: Air Force, and a veteran of both WWII and the Korean War. NASA selected him as one of the Mercury Seven for Project Mercury, and he became an austronaut for the Project Gemini and Apollo Program.

In 1961, Grissom became the second United States citizen to fly in space during a suborbital flight, as he was the pilot of Mercury-Redstone 4 (Liberty Bell 7) on July 21, 1967. On March 23, 1965, Grissom was the Project Gemini command pilot for Gemini 3 (Molly Brown) during a successful three-orbit mission.

Ed White II was a aeronautical engineer, U.S. Air Force officer, pilot and NASA astronaut. He was a member of the so-called “Next Nine” astronauts picked for the Gemini and Apollo missions, and became a part of the crews for of Gemini 4 and Apollo 1.

On June 3, 1965, White became the first United States citizen to walk in space, and a photograph of him performing his Gemini 4 space walk is included in the Voyger Golden Record. During his space walk, White used an oxygen-propelled gun to propel himself. He was reluctant to return within the alloted time and had to be ordered back into the spacecraft.