Apollo 13, the US spaceflight, launched on April 11, 1970, and suffered from an oxygen tank explosion on its way to the moon. The accident threatened the lives of the three astronauts – commander Jim Lovell, lunar module pilot Fred Haise and pilot module for command module Jack Swigert. Apollo 13 would have been NASA’s third manned mission to the moon. 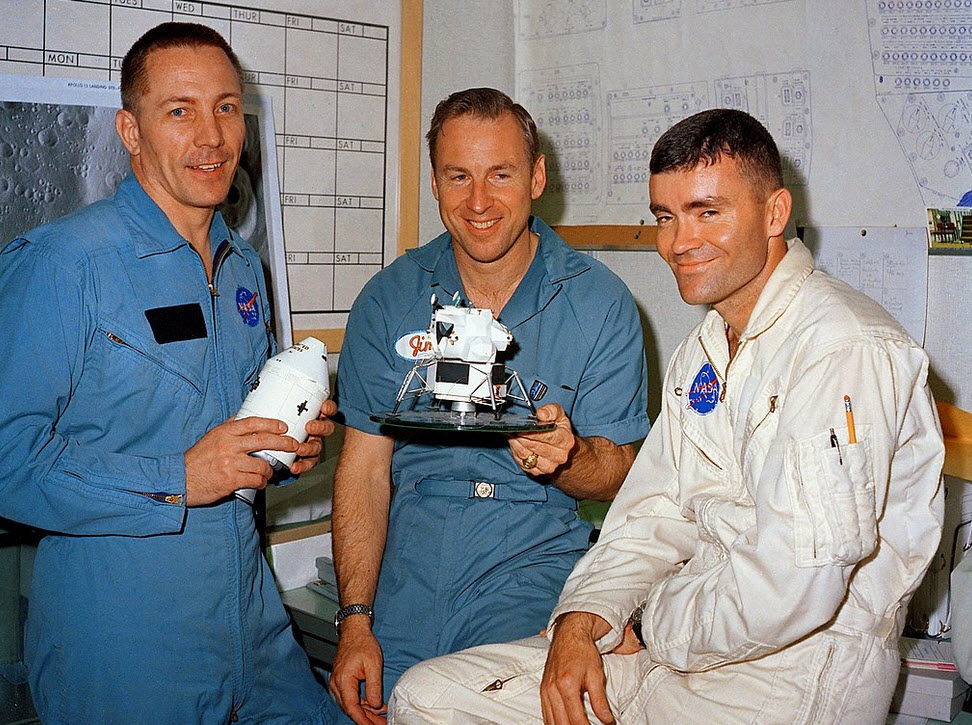 Apollo 13 was launched from Cape Kennedy, Florida, by a giant Saturn V rocket and just minutes later it reached orbit around the Earth. About 2.5 hours after launch, the still attached S IVB third stage was resumed to give the final boost to the moon.

The first day after the launch, everything went according to plan. Apollo 13 slid silently through space at about 5,000 km/h with astronauts Jack Swigert, Fred Haise and Jim Lovell on board.

Early in the evening of April 13, they checked all systems ahead of the upcoming landing. Suddenly a loud explosion was heard. All three astronauts quickly gathered in the Odyssey to study the instruments in an attempt to determine what had happened. They noted that one of the most important electrical systems on board was degrading. The information was sent to Houston and quickly turned a routine flight into one of the most exciting moments in space history. That’s when the famous phrase was uttered: “Okay, Houston, we’ve had a problem here.”  The phrase has since often been misrepeated as “Houston, we have a problem” but the actually message said “Okay, Houston, we’ve had a problem here.”

Eight seconds after the explosion, the pressure in one of the service module’s two cryogenic oxygen tanks had dropped to zero. Together with the cryogenic hydrogen tanks, the required supplies are fed to the vessel’s three fuel cells, which were necessary for the generation of electric power, oxygen for respiration, and drinking water. In the spacecraft’s service module, oxygen tank 2 had exploded. One side of the vessel has been torn apart and oxygen flows out of the hole from oxygen tank 1, which has started leaking.

Two fuel cells are knocked out and the third begins to fail. The spacecraft’s rocket engine will hardly be able to be restarted because the fuel cells must have oxygen to generate rocket fuel, electricity and water. Apollo 13 had been stranded in space.

What was most important to them at the time was oxygen. The air in the Odyssey command module lasts one hour and three quarters. The three astronauts will then be suffocated to death.

A moon landing was completely out of the question.

Everyone worried about the astronauts and their safety. Everyone was glued to their TVs and radios to get the latest updates.

When they had traveled about 20 hours from the moon, they activated the lunar module and placed themselves in it. A team of experts worked to check out all feasible maneuvers and situations using flight simulators.

The whole world wanted to help save the American astronauts. Four Soviet ships began moving towards the planned recovery area, while French and British warships also moved to the rescue. During the evening of April 14, all radio contact with Apollo 13 was lost when they took a turn behind the moon. Then Apollo 13 started its journey to come home to earth. At the same time, the third part of Saturn IV B  crashed on the moon exactly as planned. They had planned it as an experiment to cause an artificial lunar quake to gain a greater understanding of how the moon was built inside. The astronauts were pleased that at least something had worked as it should during this space journey.

About two hours later, the lunar module’s propulsion system ignited for 5 seconds at 10 percent gas, 21 seconds at 40 percent gas, and almost 4 minutes at full throttle. This added 941 km per hour to the speed of Apollo 13, which reduced the length of the journey home by 10 hours and ensured a large splash in the Pacific Ocean south of Samoa. Both the oxygen on board and the national water were sufficient for the entire trip. The astronauts had reduced their daily water and electricity consumption.

However, the cartridges of the lunar module that removed carbon dioxide from the air would only last for about 50 hours, and those from the command module were not designed to fit in the lunar module. So engineers who remained on Earth had to send instructions to the astronauts aboard Apollo 13 on how to connect the cartridges from the command module to the moon module’s hoses.

The Lunar Module was named Aquarius and is the part of the spacecraft that was supposed to descend to the surface of the Moon. Instead, Aquarius helped get three astronauts safely back to Earth.

On April 17, 1970, the command module landed in the Pacific Ocean with all three crew members alive. They were picked up from the sea by the aircraft carrier USS Iwo Jima.

Why the accident happened.

During testing in March 1970, the oxygen tank did not manage to drain properly of oxygen. The test team decided to solve this problem by heating the tank overnight to force the liquid oxygen to burn off. But the increase in current caused the automatic shut-off switches on the tank’s heater to fail, and the temperature rose to more than 540 degrees Celsius. The heat damaged the insulation on the wires inside the tank – which effectively turned the tank into a bomb waiting to explode.