NASA built Saturn V to be able to send humans to the moon. The V stands for the Roman numeral 5.Saturn V was used in the Apollo program in the 1960s and 1970s. It was the most powerful rocket ever flown successfully. 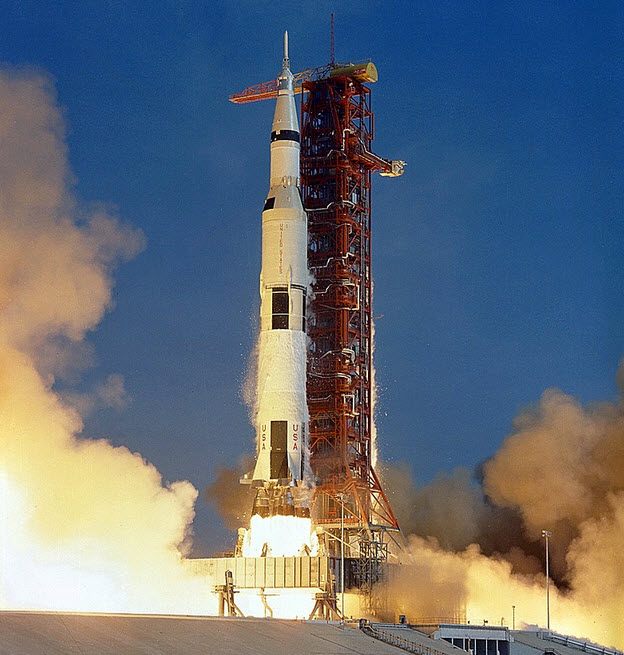 It was first launched for the Apollo 4 mission in 1967. After that, it launched twelve missions for Apollo and a mission to place the Skylab space station in orbit – not once did any crew members lose or load during the journey.

To date, Saturn V is the only launch vehicle that transports humans beyond low Earth orbit and to the moon. During the 6 years it was used, Saturn took a total of 24 men to the moon. NASA legends Neil Armstrong, Michael Collins and Buzz Aldrin set off using Saturn V.

Saturn V is the tallest rocket ever built, and is 111 meters high. It’s about the height of a 36-story building. The Saturn V rocket is about 18 meters higher than the Statue of Liberty. Saturn V was 10 m in diameter. It could carry a load of 118 tons to low orbit around the Earth and 47 tons to the moon.

At launch, the Saturn V weighed over 3000 tons of kilogram, which is about as much as 400 adult elephants. The weight mostly consisted of rocket fuel.

The various stages would use their engines until the fuel ran out and then separate from the main rocket. The first two stages that fell ended up in the sea. The last step remained in space or crashed on the moon.

Since then, manned space travel has only revolved around the earth.

Saturn V is still the tallest, heaviest and most powerful rocket that has ever successfully reached orbit.